Outings are arranged for members usually every month. They are organised at cost price, with transport, tickets and gratuities included.

Also, a short four or five day holiday is included in the itinerary every year and previous destinations have included Northern Ireland, Tuscany, Madrid, Slovenia. This year its Northumbria in June. Ideas for future outings are welcomed from members. Please email the Outings Co-ordinator for information on holidays or future outings.

The following visits are planned for 2019/20. There may be changes to the published programme so please check with the Outings Organiser on this email: Outings Co-ordinator outings@wallingfordu3a.org

July – Thames Barrier Boat trip from Tower Bridge to the Barrier and a talk on the operations of the structure.

August – Compton Vernay Introductory talk, a view of the several art galleries and the Tea Exhibition.

November – Tate Modern and Tate Britain. We visited Tate Modern first, received a short guided tour then took the boat to Tate Britain, where there was a further guided visit.

28th February –  TUTANKHAMUN – Treasures of the Golden Pharaoh Exhibition in London. Last chance to see the real items in the UK.

20th – 24th June – Jewels of Northumbria – All in just five days!!  See our itinerary here for a taster.

Our 2017 holiday to Lake Bled, Slovenia 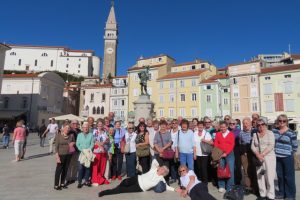 A group of 38 of our members had a memorable 6-day holiday based at Lake Bled.  There were many highlights including a visit to Postojna, one of the world’s largest cave systems and a wonderful day at Piran, a medieval town with a Venetian influence, a typical Mediterranean look and, on the day itself, a very Mediterranean climate.

To Bucharest, a city of extremes, then to Transylvania in the Carpathians, an area of natural beauty and home to wonderful scenery, Dracula’s Castle (quite ‘sort of interesting’) and Peles Castle, (as in the photo) a truly wonderful 19th century chateau filled with highly decorated rooms, set in the most picturesque setting.  A most enjoyable holiday with a happy group of members. 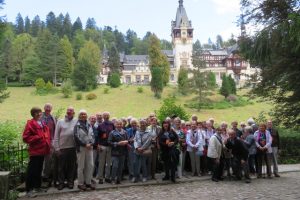